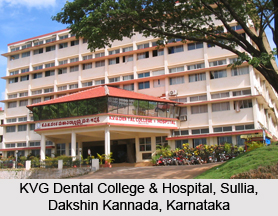 The KVG Dental College & Hospital came into existence on 2nd September, 1991 and it has established itself as one of the premier medical institutions in the state of Karnataka. The college is situated in Sullia, in the Dakshin Kannada district and it is being sponsored by the Academy of Liberal Education (Regd.), Sullia. Though the college started its journey modestly, it has now grown into one of the best medical institutions in Karnataka.The KVG Dental College & Hospital, Sullia, Dakshin Kannada started functioning with student strength of 40. The clinical section of the Dental College started its operations in a wing of the KVG Hospital and Research Centre, Sullia, from January 1993. The college management shifted all the Departments of the College to a new Dental College Building in December 1993. The then Chief Minister of Karnataka, Sri. Veerappa Moily inaugurated the new building on 24th April 1994 and the clinical wing was inaugurated by the President of Dental Council of India (DCI), Dr. R. K. Bali, at the same function.The KVG Dental College & Hospital, Sullia, Dakshin Kannada offers a large number of courses in various field of dental science at both the undergraduate and postgraduate levels. The undergraduate BDS degree course of this institution got recognition from the Dental Council of India (DCI) in January 1996 and a total of nearly 40 students of the college’s first batch graduated from the institution, during the same period. The college increased its admission capacity 40 to 60 students in the Academic year 1994-95 and the capacity was again increased to 100 students in the Academic year 1995-96. The college started offering the postgraduate MDS degree course from September, 1998, with an intake capacity of two students.The KVG Dental College & Hospital, Sullia, Dakshin Kannada offers postgraduate courses in several disciplines like Prosthodontics, Conservative Dentistry & Endodontics, Oral & Maxillofacial Surgery, Orthodontics and Pedodontics. The students are required to have passed the pre-university course with separate 50% marks in English & 50% aggregate in science subjects (Physics, Chemistry, Biology), for getting admission in the BDS course of the college. On the other hand, the students desirous of getting admitted in MDS course are required to have a BDS degree recognized by the Indian Dental Council.

Apart from offering the courses, the KVG Dental College & Hospital, Sullia, Dakshin Kannada also has a large number of departments that are helping the administration both in imparting knowledge to the students and providing quality treatment to the people of Karnataka. Some of the major departments of the college include the department of Oral Medicine, Diagnosis & Radiology, Preventive & Community Dentistry, Oral & Maxillofacial Surgery, General Medicine, Periodontics, General Surgery, Conservative Dentistry & Endodontics, General Pathology & Microbiology, Prosthodontics etc. Some other important departments of the college are the department of Pharmacology, Orthodontics, Human Anatomy, Pedodontics, Human Physiology & Biochemistry and the department of Oral Pathology & Microbiology.

Other Dental Colleges in Karnataka